This is an Indica-dominant strain with calming effects that promote rest and relaxation. Rumor has it that this strain descends from Headband and Lemon OG, who together pass on a sweet blend of fruity, citrus flavors.

Paris OG, also known as "Paris OG Kush" and "OG Paris," is an indica-dominant hybrid marijuana strain known for its calming effects that promote rest and relaxation. In terms of lineage, rumor has it that Paris OG descends from Headband and Lemon OG, who together pass on a sweet blend of fruity, citrus flavors. With victories in multiple competitions including 1st place in the 2014 Michigan High Times' Cannabis Cup, Paris OG has undoubtedly secured itself a long-lasting reputation in the cannabis world.

The Paris OG strain is associated with an uplifting yet sedating high. It offers a piney and flowery aroma, along with a sweet blueberry taste. MMJ patients often use it to help combat chronic pain and also to relieve stress. 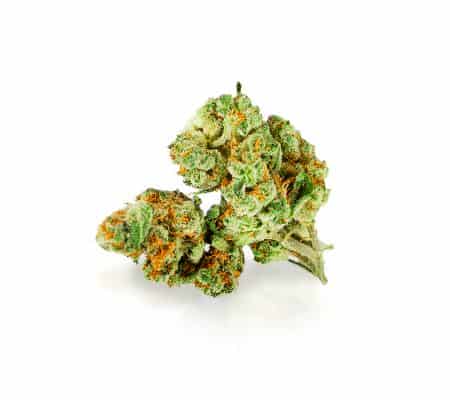 FLAVORS
BLUEBERRY
CITRUS
PINEY
COMMON USAGE
ANXIETY
CHRONIC PAIN
SLEEP
STRESS
EFFECTS
BODY HIGH/NUMBING
CALMING
SLEEP/SEDATION
GROWING INFO
IT IS DIFFICULT TO GET PARIS OG SEEDS. INSTEAD, YOU’LL NEED TO USE CLIPPINGS FROM A MATURE PLANT. IT IS EASY ENOUGH TO GROW AND HAS A FLOWERING TIME OF 8-9 WEEKS WHEN CULTIVATED INDOORS.
THC
19%
CBD
1%
SATIVA
20%
INDICA
80%

It isn’t always easy to find a Cannabis Cup winning strain, so embrace the experience if you do. Paris OG has won this award and conjures up images of a stroll down the Champs-Elysees. In reality, it was bred in Southern California, a place that is also extremely alluring.

What Is the Paris OG Strain?

It is a sativa-dominant hybrid with a dispute over its genetics. The most likely combination is Lemon OG and Headband, though no one is completely sure.

If you purchase Paris OG, don’t be fooled by the creeper high. It is also possible to get caught out by the initial cerebral high, which begins as pressure around the temples. It is a strain that could elevate your mood, and some users claim they feel euphoric. Consider using it before a social gathering, although you may shock onlookers by bursting into fits of giggles for no reason.

Ultimately, however, the indica aspects begin to take over and soon cause your limbs to feel extremely heavy. On rare occasions, users have reported feeling an almost psychedelic feeling of disassociation. You should use Paris OG in the evening because drooping eyelids accompany the heavy limbed high. Users find it hard to fight sleep and typically feel as if their mind is foggy.

On the plus side, Paris OG is ideal for use after a tough day at work. Perhaps you can turn it into your favorite Friday night strain.

You might initially get hints of diesel along with an earthy scent. However, you should also get a strong smell of citrus once you grind the buds.

In many ways, Paris OG provides a classic cannabis taste. The skunk and pine flavors are unmistakable, while the lemon and lime notes offer a pleasant aftertaste.

Although Paris OG is an indica-dominant hybrid, there are elements of sativa in its appearance, including a loose bud structure. It isn’t loaded with resinous trichomes, but the rusty orange pistils look pleasant enough against the forest green calyxes.

14 other products in the same category: